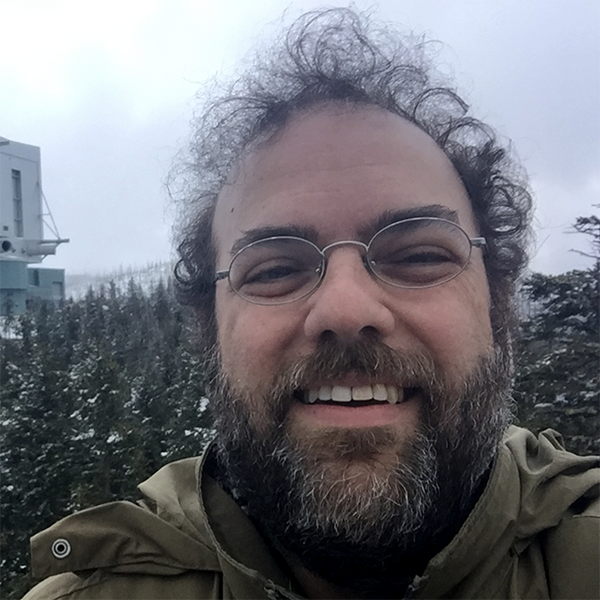 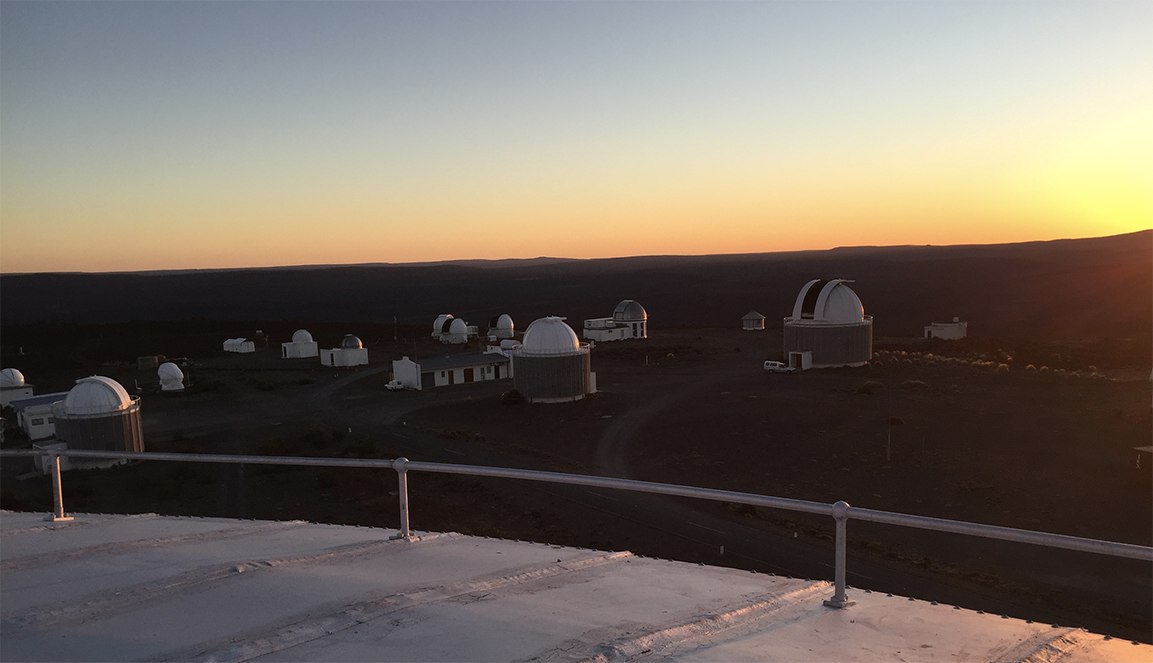 View of the South African Astronomical Observatory from the roof of the Radcliffe Telescope. Observations in support of DART are being taken at facilities around the world, including some of these telescopes.

My first asteroid-related project was as a college sophomore, 30 years ago, measuring the motion of Ceres across the sky. I have written I-don't-know-how-many papers and given even more talks about asteroids. But through the vagaries and twists and turns of my career, all of the data I've worked with have been collected at some form of telescope, in some region of the world, at some nighttime hour, too often accompanied by toaster pastries or instant ramen noodles. I am beyond excited to be involved in the first-ever planetary defense demonstration and to do so with some of my closest friends and colleagues at the Johns Hopkins Applied Physics Laboratory (or just "APL," where I work) and around the world.

The idea for this mission, called the Double Asteroid Redirection Test, or DART, is already seven years old. The path to get here has been paved with meetings, slide sets, and thousands of emails. DART is just one of many NASA missions APL has worked on during this period; New Horizons, MESSENGER, the Van Allen Probes and Parker Solar Probe have all had important milestones since 2011. In those seven years, we've made steady progress by refining DART mission concepts and studies before arriving where we are today: the last period for design before spacecraft construction begins. Launch is planned for the summer of 2021, with a possible flyby of another asteroid, 2001 CB21 in March 2022, before we arrive with a bang at the Didymos system on Oct. 5, 2022.

DART is a test of the kinetic impactor technique, a potential method to deflect an asteroid on course to impact the Earth. Kinetic impactors are one of only a small number of approaches we think are mature enough to deploy in the near future if they are needed (though we hope they won't be). The most powerful asteroid-deflection technique is the use of a nuclear device. While such a device makes for good (and bad) sci-fi movies, there is widespread desire to develop alternate techniques.

The kinetic impactor concept is rather straightforward: ram the threatening object with a spacecraft and change its orbit so that it misses our planet. In theory, we could heave ever-larger masses at ever-faster speeds to deflect ever-larger objects. However, we think there is a practical limit — we don't want to break up an incoming object into several pieces, lest we replace one big impact with multiple, only-slightly-smaller impacts. Exactly where that tradeoff lies is still uncertain, but we believe we can keep an object intact if we change its speed by less than the object's own escape speed. In other words, since we think a lot of these objects are loose aggregates of gravel held together by gravity, we don't want to shove so hard that we accidentally overcome that weak gravity and disperse the gravel.

For Ryugu, the asteroid being visited by the Japanese Hayabusa-2 sample return spacecraft right now, that maximum deflection speed is about 30 centimeters per second. That tells us two things: first, it's important to find potential problem objects as soon as possible because the longer warning time we have, the less we need to change the object's speed. Second, kinetic impactors would be used to make speed changes of millimeters to centimeters per second, so that's the kind of speed change we need to be able to measure on a test flight.

Asteroids orbit the Sun at speeds of something like 30 kilometers per second. If we change the orbital speed by 30 centimeters per second, that's 0.001 percent of its orbit speed, a change that would be hard to measure. The first idea for testing a kinetic impactor was a two-spacecraft mission. This concept, called Don Quijote and studied by the European Space Agency in 2005-2006, had an impactor (named "Hidalgo") and an observer spacecraft (named "Pancho") to measure the collision and movement of the asteroid. The estimated price tag was more than ESA wanted to pay, but the idea inspired some thought: Was there a way to do it with just one spacecraft? The DART mission is our answer to that question.

As may be obvious from the name of the mission, DART targets a binary asteroid system—that is, a "double asteroid." This system, named Didymos, has a main body ("Didymos A") about 750 meters (2,460 feet) in diameter and a satellite ("Didymos B," though it also has an extremely informal nickname of "Didymoon") 160 meters (525 feet) or so in diameter. Didymos B orbits Didymos A every 11.9 hours. The system is too far and too small for us to see it as anything more than a single point of light in even the most powerful telescopes, but that's OK for our purposes.

If we were to watch Didymos and measure its brightness, we'd see that twice every 11.9 hours it would dim by 10 percent or so as Didymoon moves either in front of Didymos A and blocks some of its light or behind Didymos A and is blocked in turn. Didymoon is moving about 17 centimeters (7 inches) per second around Didymos A, and we expect to change its speed by about half a millimeter per second.

Instead of trying to measure this speed change in Didymos' orbit around the Sun, we only need to measure it in Didymos B's orbit around Didymos A. The DART spacecraft meets its fate by ramming Didymos B. But while it's the end of the spacecraft, it's just the beginning of the experiment. Because we think Didymos B has the same kind of internal properties and density as typical asteroids (whether they are moons or not), we can apply the results of this experiment to other objects and their orbits around the Sun. Ideally, the space agencies of the world will design follow-up experiments to hone the technique, but one experiment is a great start!

We expect the impact of DART to change Didymos B's orbit period from 11.90 hours to 11.83 hours, a change we can measure by looking at the frequency of the brightness changes after we impact and comparing them to the original frequency. These measurements can be done very precisely from telescopes on Earth, and we are already identifying the telescopes the team members plan to use. Since we have an international team, these telescopes are located around the world.

Asteroid impacts can occur anywhere on the planet, and humanity's response is a truly international issue. In addition to the use of telescopes around the globe, the international nature of planetary defense also is evident in two companion spacecraft to DART that are being proposed by our European colleagues: the LICIA CubeSat, being developed by the Italian Space Agency to "piggyback" on the DART spacecraft and bail out shortly before impact to take images of the impact plume and, hopefully, the crater DART makes, and the Hera spacecraft, which is being designed by the European Space Agency to follow DART to Didymos a few years later to do a detailed reconnaissance and assessment.

The next major milestones for DART come in 2019. We have our Critical Design Review scheduled for the spring, when we need to demonstrate the design is far enough along to allow for full-scale fabrication. Some hardware work is already being done at APL and other locations. Didymos itself is observable from telescopes this coming spring, as well. It will be a busy fall for the DART team preparing for these events!

Speaking of the team, I'd like to mention a few of DART's wonderful scientists, engineers, managers and cost analysts. There's Project Manager Cheryl Reed, who led us to where we are today. Some of the other people in leadership positions on DART include Andy Cheng (with whom I co-lead the Investigation Team), Coordination Lead Nancy Chabot, Mission Systems Engineer Elena Adams, Spacecraft Systems Engineer Dan O'Shaughnessy, Mission Design Lead Justin Atchison, and Investigation Working Group leaders Angela Stickle, Cristina Thomas, Derek Richardson, Olivier Barnouin and Gene Fahnestock. We look forward to keeping you updated as DART progresses!