What's in the Box?

Unlike the many "unboxing" videos on YouTube, where viral stars eagerly tear into packages to reveal their contents, the Double Asteroid Redirection Test team took its time to carefully remove the crate that contained the structure for the DART spacecraft.

The package had come to the Johns Hopkins Applied Physics Laboratory (APL) all the way from Los Alamitos, California. Piece by piece, the panels were removed to reveal a columned aluminum honeycomb structure that measures about 6 1/2 feet (2 meters) on each side. Though small upon first glance, the spacecraft will eventually be outfitted with 28-foot (8.5-meter) solar arrays, with a wingspan that will stretch 65 feet (20 meters) from tip to tip. The process to unbox the spacecraft body in a campus high-bay took about four hours and was overseen by a team of 11, led by APL's Betsy Congdon, DART's lead mechanical engineer.

The structure will next be loaded with mass simulators and take a ride on the vibration table to verify the team's structural analysis. After a short stay at the Lab it'll be shipped back west, this time to Aerojet in Redmond, Washington, where the spacecraft's propulsion system will be installed. DART will return to APL early next April, for additional testing and installation of the spacecraft's subsystems.

"We are excited to have started on the early phases of the spacecraft integration and test," said Elena Adams, DART mission systems engineer at APL. "There is a long way to go, but receiving the flight primary structure and performing these early tests are some of the first and necessary steps to completing our mission to hit an asteroid."

DART, the first mission to come out of NASA's Planetary Defense Coordination Office, will launch in 2021 from Vandenberg Air Force Base, California, aboard a SpaceX Falcon 9 rocket. DART will aim for a binary asteroid system that includes Didymos A and its moon, Didymos B. The moon is the target of this first-ever, in-space planetary defense test, which aims to "nudge" the smaller asteroid and slightly change its course around Didymos A. Observers on Earth will measure the change and assess if this option, called the kinetic impactor technique, is a viable asteroid-deflection plan. 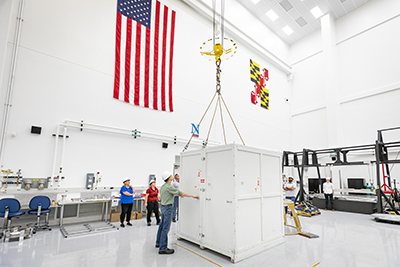 DART's primary structure arrived from Alliance Space Systems in California. The APL mechanical engineering team prepared to carefully unbox what is essentially the body of the spacecraft, an aluminum honeycomb structure measuring about 6.5 feet on each side. 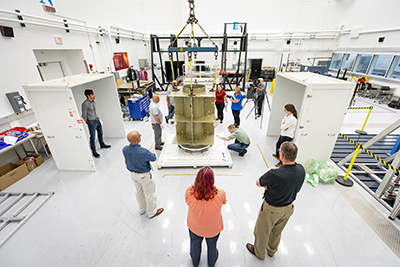 After removing paneling, the team surveyed the DART primary structure before preparing it for testing. 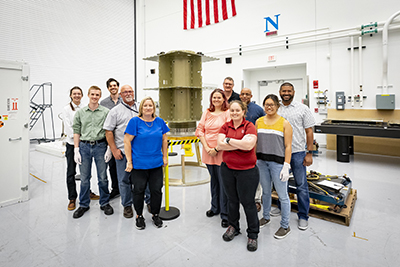