The final five-and-a-half minutes of images leading up to the DART spacecraft's intentional collision with asteroid Dimorphos. The DART spacecraft streamed these images from its DRACO camera back to Earth in real time as it approached the asteroid. This replay movie is 10 times faster than reality, except for the last six images, which are shown at the same rate that the spacecraft returned them. Both Didymos and its moonlet Dimorphos are visible at the start of the movie. At the end, Dimorphos fills the field of view. The final image in the movie shows a patch of Dimorphos that is 51 feet 16 meters) across. DART's impact occurred during transmission of the final image to Earth, resulting in a partial picture at the end of this movie. Didymos is roughly 2,500 feet (780 meters) in diameter; Dimorphos is about 525 feet (160 meters) in length. Download MP4 | Credit: NASA/Johns Hopkins APL

As a part of NASA’s overall planetary defense strategy, DART’s impact with the asteroid Dimorphos demonstrates a viable mitigation technique for protecting the planet from an Earth-bound asteroid or comet, if one were discovered.

“At its core, DART represents an unprecedented success for planetary defense, but it is also a mission of unity with a real benefit for all humanity,” said NASA Administrator Bill Nelson. “As NASA studies the cosmos and our home planet, we’re also working to protect that home, and this international collaboration turned science fiction into science fact, demonstrating one way to protect Earth.”

“This first-of-its-kind mission required incredible preparation and precision, and the team exceeded expectations on all counts,” said APL Director Ralph Semmel. “Beyond the truly exciting success of the technology demonstration, capabilities based on DART could one day be used to change the course of an asteroid to protect our planet and preserve life on Earth as we know it.”

The mission’s one-way trip confirmed NASA can successfully navigate a spacecraft to intentionally collide with an asteroid to deflect it, a technique known as kinetic impact.

The investigation team will now observe Dimorphos using ground-based telescopes to confirm that DART’s impact altered the asteroid’s orbit around Didymos. Researchers expect the impact to shorten Dimorphos’ orbit by about 1%, or roughly 10 minutes; precisely measuring how much the asteroid was deflected is one of the primary purposes of the full-scale test.

“Planetary Defense is a globally unifying effort that affects everyone living on Earth,” said Thomas Zurbuchen, associate administrator for the Science Mission Directorate at NASA Headquarters in Washington. “Now we know we can aim a spacecraft with the precision needed to impact even a small body in space. Just a small change in its speed is all we need to make a significant difference in the path an asteroid travels.”

The spacecraft’s sole instrument, the Didymos Reconnaissance and Asteroid Camera for Optical navigation (DRACO), together with a sophisticated guidance, navigation and control system that works in tandem with Small-body Maneuvering Autonomous Real Time Navigation (SMART Nav) algorithms, enabled DART to identify and distinguish between the two asteroids, targeting the smaller body.

These systems guided the 1,260-pound (570-kilogram) box-shaped spacecraft through the final 56,000 miles (90,000 kilometers) of space into Dimorphos, intentionally crashing into it at roughly 14,000 miles (22,530 kilometers) per hour to slightly slow the asteroid’s orbital speed. DRACO’s final images, obtained by the spacecraft seconds before impact, revealed the surface of Dimorphos in close-up detail.

“What a remarkable day for humanity,” said APL Space Exploration Sector Head Bobby Braun. “The team nailed it — and I couldn’t be more proud of their efforts. Data from this test will inform future planetary defense efforts. Today is a milestone in demonstrating just how far our nation’s space program has come, and how important it is to all of us here on Earth.”

Fifteen days before impact, DART’s CubeSat companion Light Italian CubeSat for Imaging of Asteroids (LICIACube), provided by the Italian Space Agency, deployed from the spacecraft to capture images of DART’s impact and of the asteroid’s resulting cloud of ejected matter. In tandem with the images returned by DRACO, LICIACube’s images are intended to provide a view of the collision’s effects to help researchers better characterize the effectiveness of kinetic impact in deflecting an asteroid. Because LICIACube doesn’t carry a large antenna, images will be downlinked to Earth one by one in the coming weeks.

“DART’s success provides a significant addition to the essential toolbox we must have to protect Earth from a devastating impact by an asteroid,” said Lindley Johnson, NASA’s planetary defense officer. “This demonstrates we are no longer powerless to prevent this type of natural disaster. Coupled with enhanced capabilities to accelerate finding the remaining hazardous asteroid population by our next Planetary Defense mission, the NEO Surveyor, a DART successor could provide what we need to save the day.”

With the asteroid pair within 7 million miles (11 million kilometers) of Earth, a global team is using dozens of telescopes stationed around the world and in space to observe the asteroid system. Over the coming weeks, they will characterize the ejecta produced and precisely measure Dimorphos’ orbital change to determine how effectively DART deflected the asteroid. The results will help validate and improve scientific computer models critical to predicting the effectiveness of this technique as a reliable method for asteroid deflection.

Roughly four years from now, the European Space Agency’s Hera project will conduct detailed surveys of both Dimorphos and Didymos, with a particular focus on the crater left by DART’s collision and a precise measurement of Dimorphos’ mass. 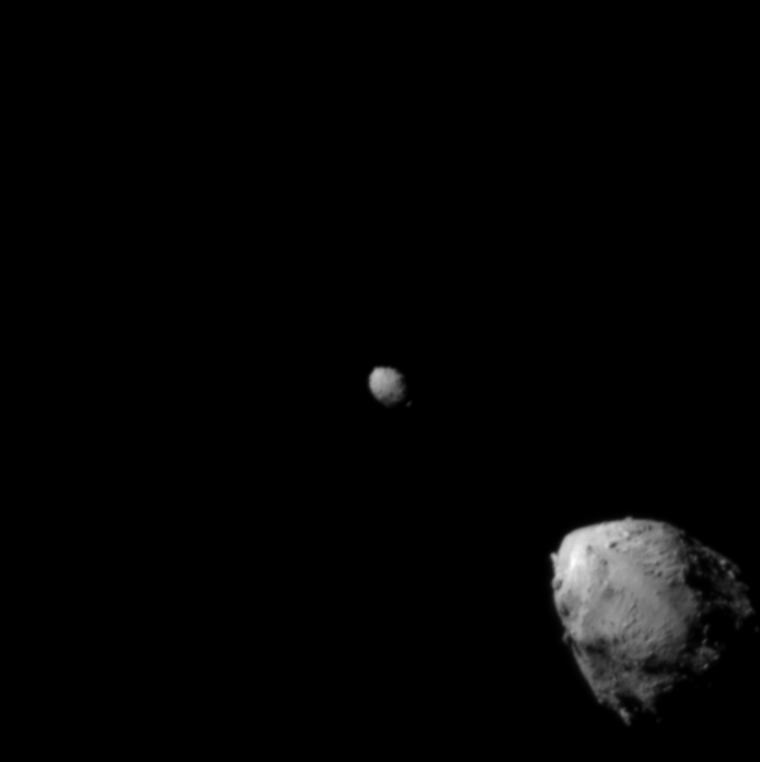 Asteroid Didymos (bottom right) and its moonlet, Dimorphos, about 2.5 minutes before the impact of NASA’s DART spacecraft. The image was taken by the onboard DRACO imager from a distance of 570 miles (920 kilometers). This image was the last to contain a complete view of both asteroids. Didymos is roughly 2,500 feet (780 meters) in diameter; Dimorphos is about 525 feet (160 meters) in length. Didymos’ and Dimorphos’ north is toward the top of the image. 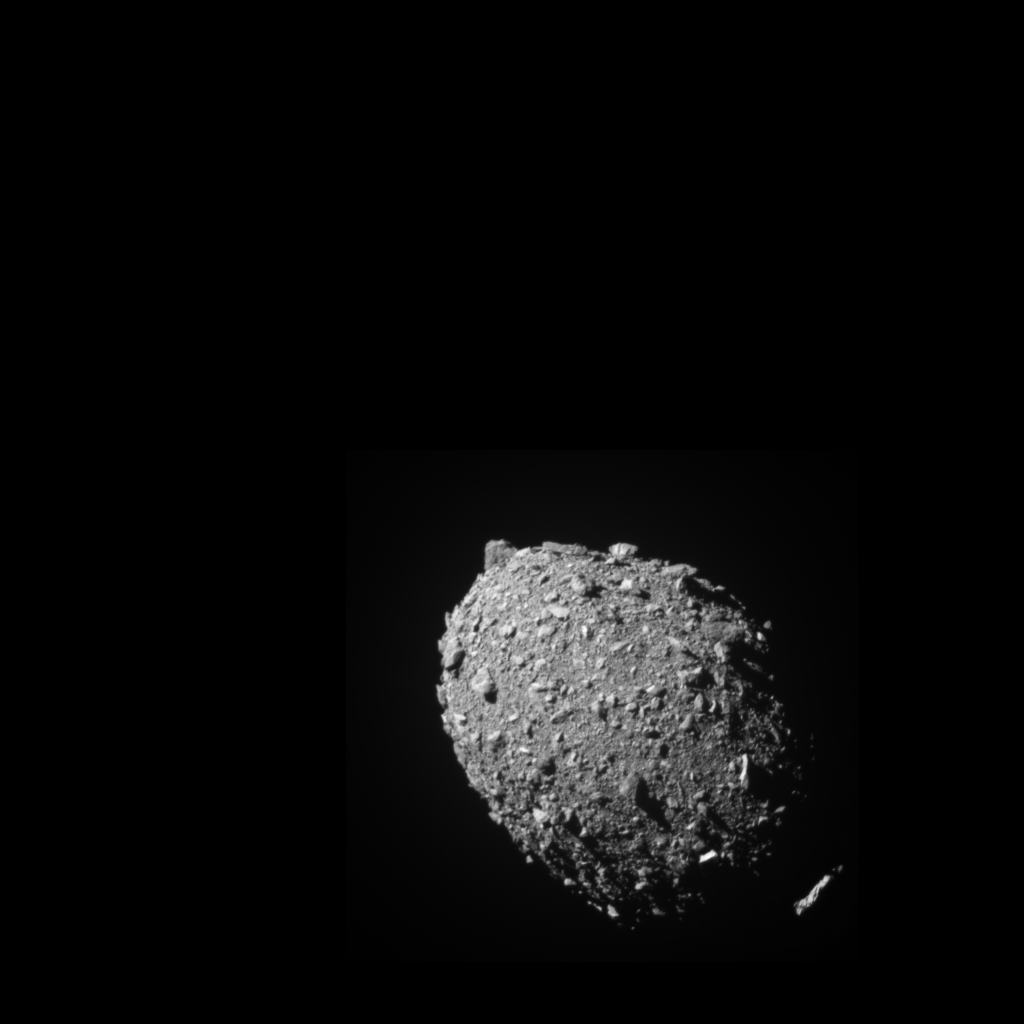 Asteroid moonlet Dimorphos as seen by the DART spacecraft 11 seconds before impact. DART’s onboard DRACO imager captured this image from a distance of 42 miles (68 kilometers). This image was the last to contain all of Dimorphos in the field of view. Dimorphos is roughly 525 feet (160 meters) in length. Dimorphos’ north is toward the top of the image. 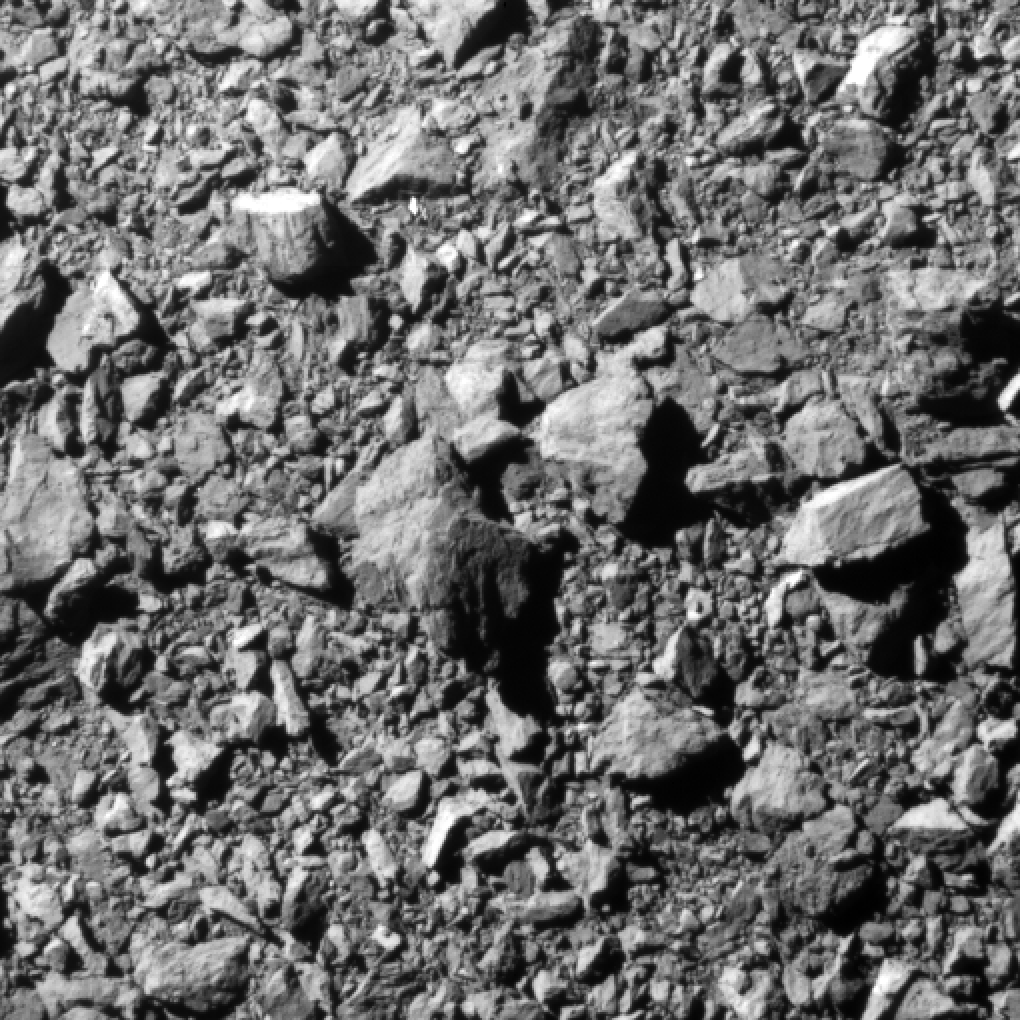 The last complete image of asteroid moonlet Dimorphos, taken by the DRACO imager on NASA’s DART mission from ~7 miles (12 kilometers) from the asteroid and 2 seconds before impact. The image shows a patch of the asteroid that is 100 feet (31 meters) across. Dimorphos’ north is toward the top of the image. 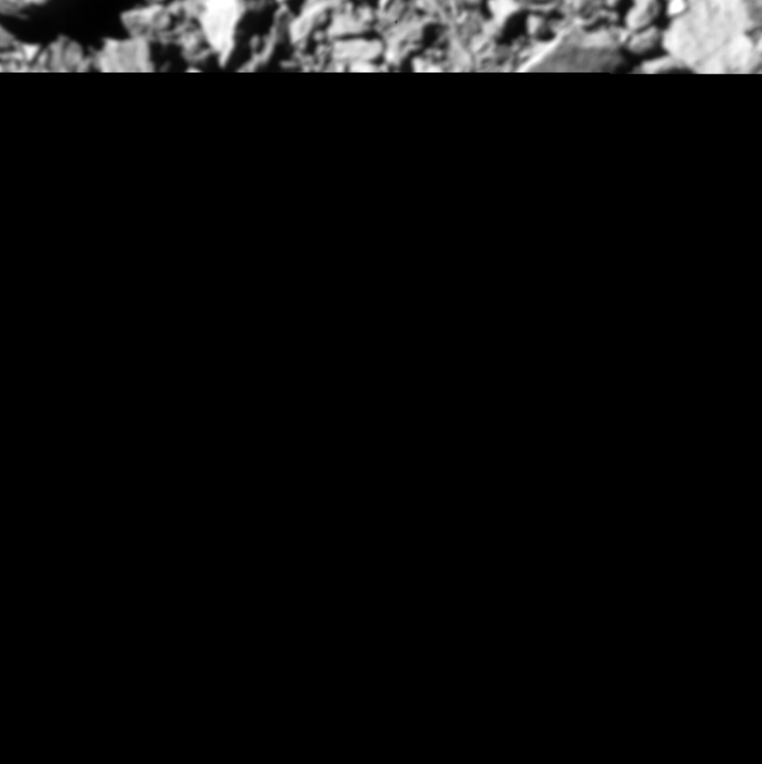 DART’s final look at the asteroid moonlet Dimorphos before impact. The spacecraft’s on board DRACO imager took this final image ~4 miles (~6 kilometers) from the asteroid and only 1 second before impact. DART’s impact occurred during transmission of the image to Earth, resulting in a partial picture. The image shows a patch of the asteroid that is 51 feet 16 meters) across. Dimorphos’ north is toward the top of the image.