After capturing images of one of the brightest stars in Earth’s night sky, the Double Asteroid Redirection Test’s (DART) camera recently set its sights on another eye-catching spectacle: Jupiter and its four largest moons. 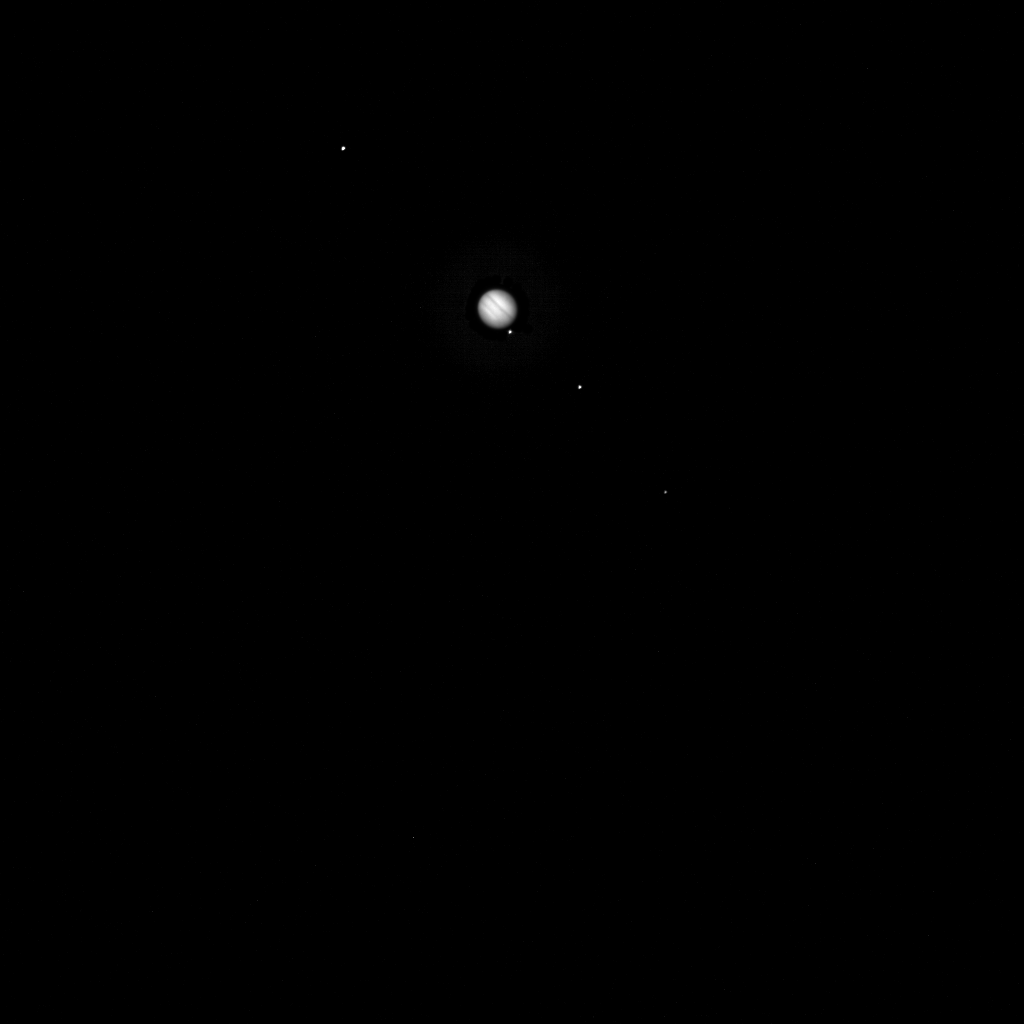 This is a cropped composite of a DART Didymos Reconnaissance and Asteroid Camera for Optical navigation (DRACO) image centered on Jupiter taken during tests of DART’s SMART Nav system. DART was about 435 million miles (700 million kilometers) from Jupiter, and about 16 million miles (26 million kilometers) from Earth, when the image was taken. Two brightness and contrast stretches, made to optimize Jupiter and its moons, respectively, were combined to form this view. From left to right are Ganymede, Jupiter, Europa, Io and Callisto.

As NASA’s DART spacecraft cruises toward its highly anticipated Sept. 26 encounter with the binary asteroid Didymos, the spacecraft’s imager — the Didymos Reconnaissance and Asteroid Camera for Optical navigation, or DRACO — has snapped thousands of pictures of stars. The pictures give the Johns Hopkins Applied Physics Laboratory (APL) team leading the mission for NASA the data necessary to support ongoing spacecraft testing and rehearsals in preparation for the spacecraft’s kinetic impact into Dimorphos, the moon of Didymos.

As the only instrument on DART, DRACO will capture images of Didymos and Dimorphos; it will also support the spacecraft’s autonomous guidance system — the Small-body Maneuvering Autonomous Real Time Navigation (SMART Nav) — to guide DART to impact.

On July 1 and August 2, the mission operations team pointed the DRACO imager to Jupiter to test the SMART Nav system. The team used it to detect and target Jupiter’s moon Europa as it emerged from behind Jupiter, similar to how Dimorphos will visually separate from the larger asteroid Didymos in the hours leading up to impact. While the test obviously didn’t involve DART colliding with Jupiter or its moons, it did give the APL-led SMART Nav team the chance to assess how well the SMART Nav system performs in flight. Before this Jupiter test, SMART Nav testing was done via simulations on the ground.

The SMART Nav team gained valuable experience from the test, including for how the SMART Nav team views data from the spacecraft. “Every time we do one of these tests, we tweak the displays, make them a little bit better and a little bit more responsive to what we will actually be looking for during the real terminal event,” said Peter Ericksen, SMART Nav software engineer at APL.

The DART spacecraft is designed to operate fully autonomously during the terminal approach, but the SMART Nav team will be monitoring how objects are tracked in the scene, including their intensities, number of pixels, and how consistently they’re being identified. Corrective action using preplanned contingencies will only be taken if there are significant and mission-threatening deviations from expectations. With Jupiter and its moons, the team had a chance to better understand how the intensities and number of pixels of objects might vary as the targets move across the detector.

“The Jupiter tests gave us the opportunity for DRACO to image something in our own solar system,” said Carolyn Ernst, DRACO instrument scientist at APL. “The images look fantastic, and we are excited for what DRACO will reveal about Didymos and Dimorphos in the hours and minutes leading up to impact!”

DRACO is a high-resolution camera inspired by the imager on NASA’s New Horizons spacecraft that returned the first close-up images of the Pluto system and of the Kuiper Belt object Arrokoth.

DART was developed and is managed by APL for NASA’s Planetary Defense Coordination Office. DART is the world’s first planetary defense test mission, intentionally executing a kinetic impact into Dimorphos to slightly change its motion in space. While no known asteroid poses a threat to Earth, the DART mission will demonstrate that a spacecraft can autonomously navigate to a kinetic impact on a relatively small target asteroid, and that this is a viable technique to deflect a genuinely dangerous asteroid, if one were ever discovered.