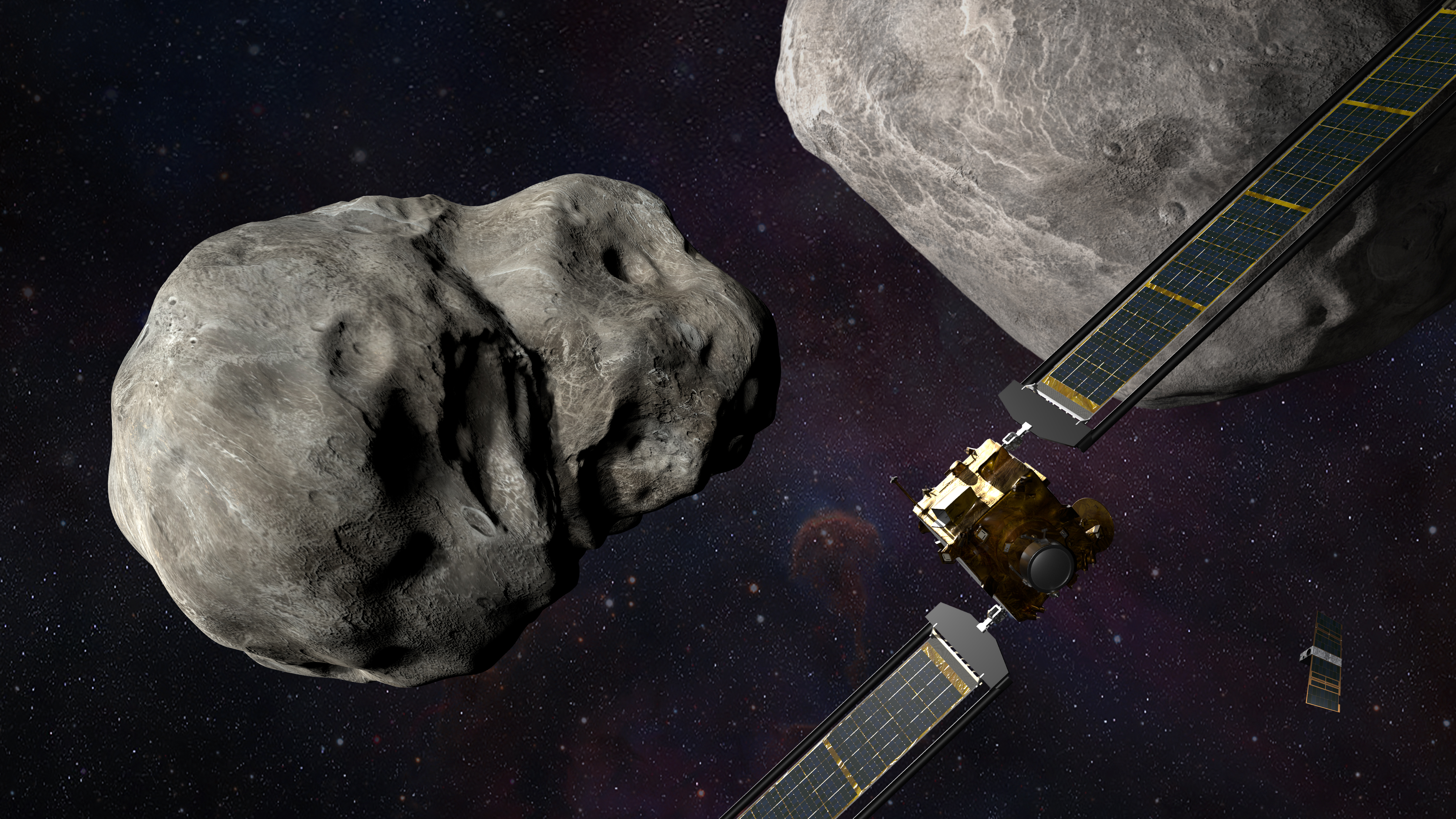 In 2022, a binary asteroid system—an asteroid with its own moon—will be the target of NASA's Double Asteroid Redirection Test (DART), the first full-scale demonstration of an asteroid deflection technology for planetary defense. The DART spacecraft will execute a kinetic impact, deliberately crashing into the asteroid's smaller moon, Didymos B, to change its motion in space. To mark this historic mission, Didymos B is getting an official name of its own: Dimorphos. DART, depicted in front of Dimorphos, will impact the asteroid moon, and the Italian Space Agency's LICIACube (to the right of the spacecraft) will document its impact.

Nearly two decades ago, a near-Earth asteroid was discovered to have a moon and the binary system was given the name "Didymos" -- Greek for "twin," a loose description of the larger main body and the smaller orbiting moon, which became unofficially known as Didymos B.

In 2022, that moon will be the target of NASA's Double Asteroid Redirection Test (DART), the first full-scale demonstration of an asteroid deflection technology for planetary defense. The DART spacecraft will execute a kinetic impact, deliberately crashing into the asteroid to change its motion in space. To mark this historic mission, Didymos B is getting an official name of its own: Dimorphos.

"Upon discovery, asteroids get a temporary name until we know their orbits well enough to know they won't be lost. Once the Didymos system was identified as the ideal target for the DART mission, we needed to formally distinguish between the main body and the satellite," said Andy Rivkin, a research astronomer and DART investigation co-lead at the Johns Hopkins Applied Physics Laboratory (APL), which is building and managing the mission for NASA.

Just as defending our planet from potentially hazardous asteroids takes a global effort, so does naming an asteroid's moon.

In 2003, astronomer Petr Pravec, at the Ondřejov Observatory in Czechia, was tracking the brightness of a still-unnamed asteroid when he recognized a pattern consistent with a small moon. Across the world, planetary scientists Lance Benner, at NASA's Jet Propulsion Laboratory in Pasadena, California, and Mike Nolan, then at the Arecibo Observatory in Puerto Rico, gathered corroborating evidence. Together, the findings pointed to the existence of a binary asteroid.

The near-Earth asteroid was originally discovered in 1996 by Joe Montani of the Spacewatch Project at the University of Arizona, but its orbit needed to be confirmed before it could be named. Backed by the work of Pravec, Benner, Nolan and other astronomers, Montani suggested "Didymos" to the International Astronomical Union (IAU), which quickly approved.

After Didymos B was identified as the target for DART, mission leads at APL encouraged the discoverers to propose a separate name for the system's moon. Weighing many possibilities, they eventually went with a suggestion by Kleomenis Tsiganis, a planetary scientist at the Aristotle University of Thessaloniki and a member of the DART team. This week, the IAU announced official approval of the name.

"Dimorphos, which means 'two forms,' reflects the status of this object as the first celestial body to have the 'form' of its orbit significantly changed by humanity -- in this case, by the DART impact," said Tsiganis. "As such, it will be the first object to be known to humans by two, very different forms, the one seen by DART before impact and the other seen by the European Space Agency's (ESA) Hera, a few years later."

Dimorphos, measuring 160 meters (525 feet) in diameter, is the perfect target for the DART test because of its orbit around the larger main body Didymos (which measures 780 meters, or 0.48 miles, in diameter), and because of the pair's relatively close proximity to Earth in late 2022.

"Astronomers will be able to compare observations from Earth-based telescopes before and after DART's kinetic impact to determine how much the orbital period of Dimorphos changed," said Tom Statler, DART program scientist at NASA Headquarters. "That's the key measurement that will tell us how the asteroid responded to our deflection effort."

DART's impact with Dimorphos will also be recorded in space by LICIACube, a companion CubeSat provided by the Italian Space Agency that will travel on, and be deployed from, DART. Further investigation of Didymos and Dimorphos will be performed by ESA's Hera mission a few years after DART's impact. The DART and Hera mission teams are working together through an international collaboration called the Asteroid Impact and Deflection Assessment (AIDA).

"DART is a first step in testing methods for hazardous asteroid deflection," said Andrea Riley, DART program executive at NASA Headquarters. "Potentially hazardous asteroids are a global concern, and we are excited to be working with our Italian and European colleagues to collect the most accurate data possible from this kinetic impact deflection demonstration."

DART is the first mission developed for NASA's Planetary Defense Coordination Office, and one piece of NASA's wider planetary defense planning. In 2016, NASA established the Planetary Defense Coordination Office (PDCO) to lead US Government efforts to detect and warn of potentially hazardous asteroids and comets and to study means to mitigate the hazard when possible.

From Didymos B to Dimorphos, it's a fitting name for an asteroid that will serve dual roles as a both a test target and a part of a blueprint for protecting the planet in the future.